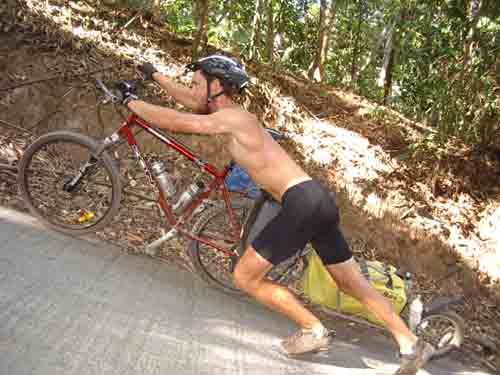 On the 5th September a vanguard of two SERC members will leave Ireland on a road trip to Bourg-d’Oisans, a small French town located in the south East of France.  The purpose of their trip is to carry equipment, bikes etc and to set up camp.  The remaining group of ten including four alp virgins will fly out from Dublin the following Saturday to rendezvous at a camp site at the base of the iconic Alpe d’Huez in the heart of the French Alps. The group will spend a week climbing the many  challenging and famous Cols in the region.

In preparation for the trip a meeting was held in the Old Ship Arklow many months ago  to organise and discuss a  training plan that was drawn up by Alp veterans Stephen Furlong and Matt Heaney. Stephen also outline important issues that the group should be aware of, but as the weeks went by members of the group started to ask questions about the trip… Stephen gave the same low key reply ” Were ye not listening to me at the meeting, I already gave ye this information,  I might as well be talking to the wall” where does the man get the patience ? … anyway  it was nice to hit a few hard training climbs when all that could be heard was the sound of every one practicing their heavy breathing routine, and when all thought their climbing fitness was improving Derrick or  Kirk would make a guest appearance  to show how it should be done. We also have to thank Larry Doyle and Brian Donnelly with his trusted camera who also join in adding their encouragement and support on the weekly spins.

Initially the training spins involved every RAMP around Avoca and Redcross, and when the leaders announced that we’re turning right or left here there was a collective “Ahh for F**k sake not up there” followed by the crashing and mashing of gears and spinning back wheels, ” there’ll  be worse than this in France” says Matt  (Wickla Accent) ………. or the ” Don’t f**king fall there Michael” from Matt on a 24+ gradient to which he duly obliged, although in fairness to Michael he did only have a 26 or 28 on the back.

With only a couple of weeks of training remaining, our Logistics officer says that every thing in place ..  while on the road it’s all coming together with a bit of competition on the climbs with Colm mark 2 and a couple of “Snakes” who come out of the grass now and then to test the water,  but I’m  sure they’re keeping their powder dry for France,  bikes are also being prepared with new cables, tyres and drive trains being fitted and tweaked in preparation for the long haul.

There has been a problem with your Instagram Feed.