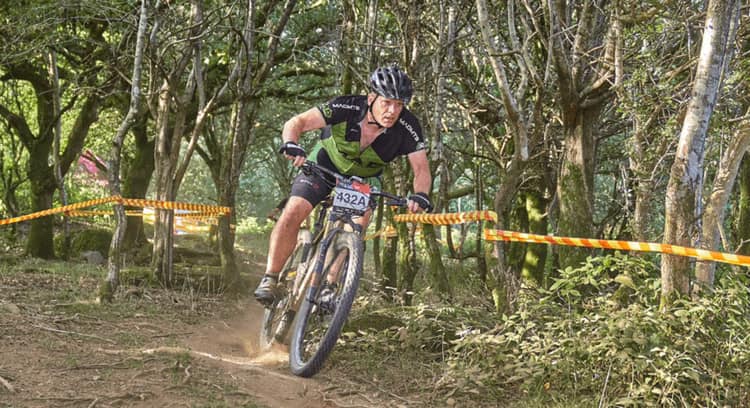 A little piece from club member Ian on a recent MTB endurance race.

Long range weather forecast was mixed – but it ended up being beach weather all weekend, including 33C on the drive from the ferry to Plymouth.

Great social night on the Thursday with a crew we know well from the Isle of Man and some reprobate from Giant Dublin (Ger – part machine, part robot and his better half).
I wanted to hit 100 miles (13 laps – about 55 mins a lap) and Conor wanted to ride and enjoy the course for as long as possible (because he’s sensible).
24 pairs is probably the second most fought for race after 12 hr pairs so we knew we were up against full on teams and were riding for ourselves rather than podium.
Course was really good, one grind of a hill, three shortish gits and the rest was either level of downhill, happy days. The descents were phenomenal – 40kmph, pump track bombholes, slalom sking, drops and jumps – proper fun stuff
The fastest strategy is to do a lap on/lap off and after our pottering practice lap of 55 mins this is what we went for. I bravely bullied Conor into doing the outlap – and we flew. Opening laps were around 45 mins and even at the end of the event we were cruising at 53 minutes.
Fluids were the main problem, I’ve no bottle bosses and it was too hot for a camelback so I was necking pints on my rest lap whilst Conor was able to horse it as he went around.
Conor finally had a rest about 2am (13 hours after he started) and I plodded on a bit. The night got really cold and as I was having to stop to neck a pint each lap (body was still thinking to “sprint” even though I had enough time to complete the 100 miles I wanted to) but staying in the same kit the sweat got me really cold. I’m not sure which of the two is the reason but I bonked on my lap 12. Proper full on wobbles. A big lazy rest and I was back on the bike to complete lap 13.
Looking at the times, my last race lap and my very last lap are both 53 minutes so it looks like I was pretty consistent and as we had built up some much time in the early laps, if I had paid proper attention I could have stuck another lap in there and still be under the 12 hours riding (I was proper tired by this point though tbf and I don’t think I would have been arsed). I’m right on the edge of the 161km needed to get 100 miles, but as I’m including the cycle to and from transition I’m happy I got it. A brilliant event – we had kids using us as target practice for their water pistols, or passing out jelly babies and the like. Loads of high fives and just a really nice chilled atmosphere.