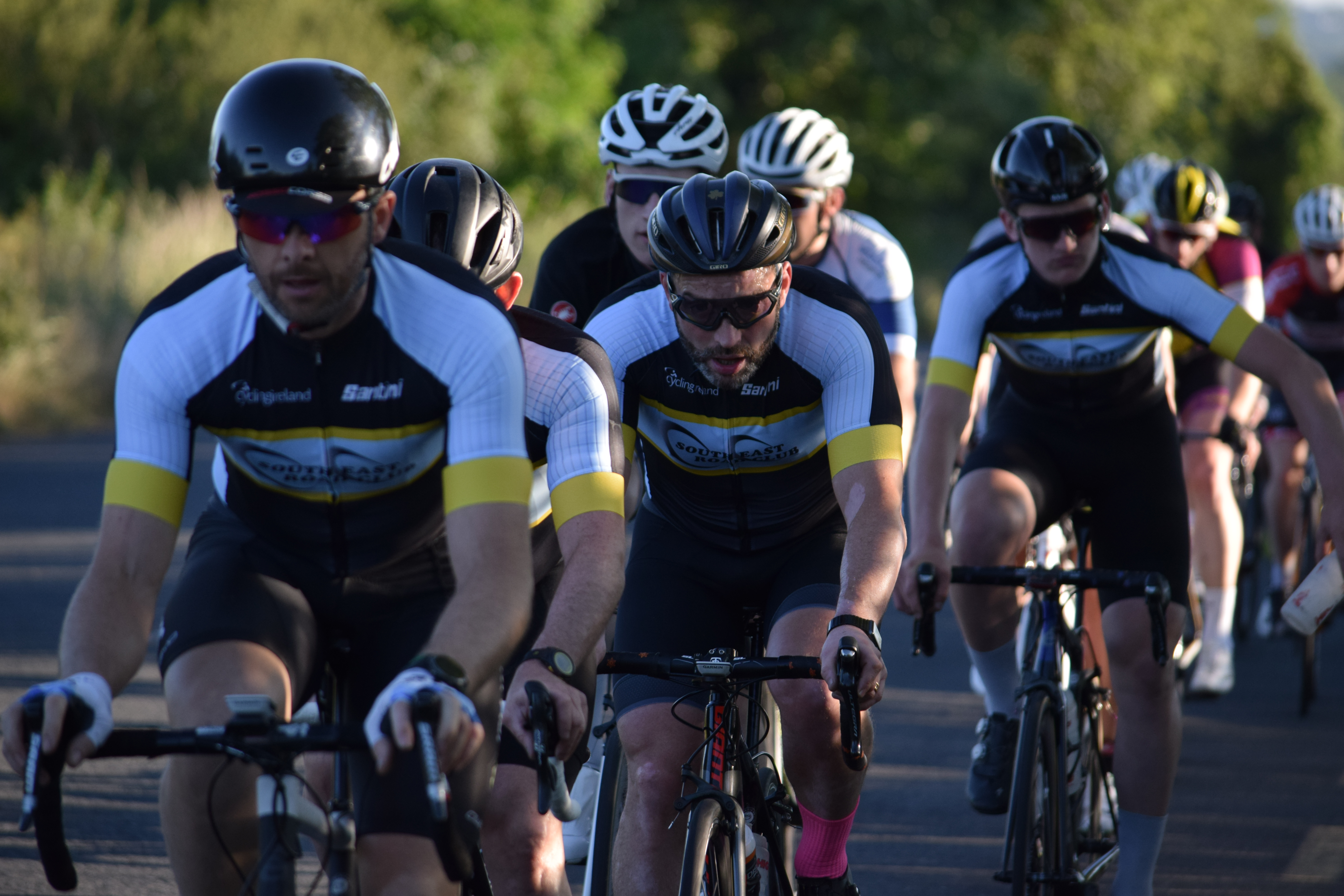 After five rounds of competitive racing in the A1, A2 and A3 category Conor Short of the South East Road Club claimed the top spot on the podium without having to put in too much effort in the final round. Shorts nearest rival for the top prize, Paul Byrne was unable to race on the night, so on paper it was between Short and Andy McGuire from the Rossbury racing club in Newross, however paper never refused ink and as the race unfolded Short only had to stay out of trouble to claim the overall title. With just over a lap completed Luke Kearney (SERC) and Alan Mackey (Rossbury) went on a break very early in the race and quickly opened a forty second gap that went out to a minute and twenty seconds before a chasing trio of Declan Kinch (Slipstream), Andy Loughlin (Slipstream) and Brian Maher (Slaney CC) reduced the gap to forty seconds but were unable to catch the breakaway before the finish line.
The top five places in round five went to racers who had not collected any points through out the league except for Declan Kinch from the Slipstream club who came in fourth place on the night to add six points to his tally, putting him in fifth place overall, pushing Martin Peters of Gorey CC into sixth place on the final table. The final placings after five nights of racing were 1st Conor Short (SERC), 2nd. Paul Byrne (Gorey CC), 3rd. Andy McGuire (Bio-Racing), 4th Brendan Dunne (Slipstream), 5th. Declan Kinch (Slipstream) and 6th. Martin Peters (Gorey CC).
In the A4 category the battle between Jason O’Toole (SERC) and Neil Doyle (Rossbury) continued from where they left off the previous week and it was Doyle who tipped the finished line in what was their closest encounter in this seasons SERC league. The A4’s served up another exciting and testing race over the fifty kilometer circuit on the Old N11. but as much as O’Toole and Doyle tried to open a gap with attack after attack the peleton were quick to respond, but were unable to upset the final placing’s with Neil Doyle from Rossbury racing stepping onto the top spot on the podium with Jason O’ Toole (SERC) and David O’Neill (Wexford Wheelers) claiming second and third places respectively.
The A4 table was as follows 1st. Neil Doyle (Rossbury Racing), 2nd. Jason O’ Toole (SERC), 3rd. David O’ Neill (Wexford Wheelers), 4th. Dave Murphy (Rossbury Racing), 5th. Wayne Byrne (SERC), 6th. Paul Barry (Rossbury racing)
South East Road Club would like to thanks all the Marshals and helpers who turned out over the five nights to ensure that the racing was safe for all the competitors.